The world is approaching the sixth anniversary of the 2030 Agenda for Sustainable Development, adopted by the UN General Assembly on 25 September 2015. 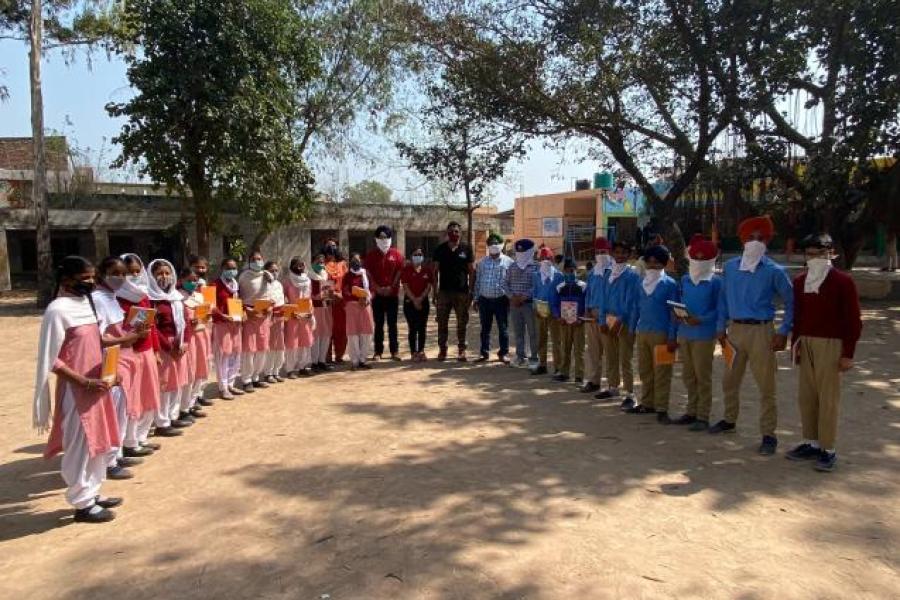 Volunteers from Chitkara University (center) pose with students of the government school in Tahu Village in the State of Punjab, India, during a book distribution event, part of the 3R Campaign 2030, 4 March 2021.
Photo | Courtesy of Chitkara University.

With its Sustainable Development Goals (SDGs), the 2030 Agenda envisions the fulfilment of the aspirations and dreams of millions of people for a better world. One may regard implementation of the SDGs as a solution to a multitude of problems and challenges. Breaking down the objective of sustainable development into social, economic and environmental themes of 17 Goals and 169 targets enables us to design policies and initiatives for effective implementation at the grassroot level. The localization of the SDGs has gained considerable significance in India, as the country’s individual states are to take responsibility for implementing the country’s development agenda. The successful implementation of the SDGs would stand as a testimony to the principle of cooperative federalism envisaged by the Government of India. It demands meticulous monitoring and supervision by the states and local governments in developing initiatives in line with the various themes of the SDGs and for their effective and timely implementation. The project developed for the State of Punjab, for example, may be viewed from this perspective.

The 2030 Agenda, to which India is a signatory, is centred on the prosperity of all living beings, especially humans. India is home to nearly one sixth of all humanity, comprising 623.7 million males and 586.5 million females, with a population density of around 382 persons per square kilometre. In India, a major parameter for classifying a human settlement as “urban” is a population density of 400 people or more per square kilometre. As per 2011 census data, 68.8 per cent of India’s population lives in villages. This fact highlights the words of Mahatma Gandhi, the father of the nation, who said that “the soul of India lies in its villages”.

Chitkara University in the State of Punjab has demonstrated its unfailing dedication to the SDGs and the effectiveness of localization, which we believe will emerge in several states in India. Local initiatives and projects, and the experience of working with local governments and people, may offer valuable insights that deserve national attention and recognition. Further, the global sustainable development community may take note of these initiatives taking place on university campuses in India and the efforts of youth and students in localizing and implementing the SDGs. This project proposal may be viewed as a right step in that direction. The practical experience of early lessons of academic life with local people, society and governments may provide enough insight for developing long-awaited institutional mechanisms to facilitate capacity-building as well as data analytics for assessing and monitoring implementation of projects at local levels, with public support and involvement. Moreover, this is an attempt to channel the creativity of our youth and students in keeping our villages plastic-free through synergy with academic institutions and local governments. The project also aims to create livelihoods for local villagers.

United Nations Security Council resolution 2535 on youth, peace and security ... refers not only to youth responses and roles, but also to the importance of their involvement in the planning, design and decision-making processes.

The initiative, known as the 3R Campaign 2030 (for “reduce, reuse and recycle”) is planned as a decade-long programme to reduce and manage plastic pollution in rural villages in India through the adoption of a set of strategic procedures derived from the fundamental principles of the SDGs. Accordingly, guidelines for sustainable practices to be adopted will be formulated and implemented with support from member institutions carrying the tagline “Clean village; clean nation”.

The project aims to be sustainable, innovative and youth- and student-centric, ensuring connectivity for further capacity-building and development. Dr. Madhu Chitkara, Pro Chancellor of Chitkara University, is a project leader and strong proponent. “My obsession with this project is to sensitize the rural population and build plastic-free villages in the State of Punjab”, he explained. “Our association with UNAI [the United Nations Academic Impact] is our real inspiration behind the project. We have young students and faculty in the project team, research and innovation support, strong unity and will to implement the SDGs of the United Nations. We have adopted five villages in the close vicinity of our University campus in Punjab State. We at Chitkara University take it as our moral responsibility to make them more sustainable and environment friendly. I wish my team all the best for successful completion of the project".

As the team leader of an innovative and cost-effective housing model for the developing nations, I was blessed with an opportunity to present the model at the United Nations in New York in 2018 at a conference chaired by Mr. Ramu Damodaran, Deputy Director of the Outreach Division in the United Nations Department of Global Communications and Chief of UNAI. We were inspired by his call to “think globally, act locally” in developing sustainable models for improving the quality of life in rural settlements in the developing world.  The 3R Campaign 2030, initiated by the Chitkara University to eradicate plastic waste from Punjab, grew from that visionary statement. During our first visit to one of the villages adopted by the University, we held a conversation with the local people. They were eager to learn how the project would improve the quality of their village. They also shared their apprehensions, such as the question of how college students could transform their village when even local governments could not. We were able to convince them, however, that it is not the percentage of success of the programme that matters most, but that exposure to different sustainable plastic waste management models was the real outcome to count on for the betterment of future generations.

We also conducted a series of intensive awareness-raising sessions with the villagers on proper disposal techniques for plastic waste as well as the adverse effects of plastics on the ecosystem of the village, its impact on their lives and work, how it percolates into our food chain, affects the health of children and livestock, etc. We did not expect an immediate change, but we did observe a gradual shift in attitude among the villagers following the sessions. Local people started following our guidelines and directions scrupulously. The positive response prompted us to work on presenting more scientific details, including a technical note on converting plastic waste into a construction material. Upon completion of the initial studies, interactions and research, we found that we could build plastic waste collection facilities in each house cluster in the village, with a cluster consisting of at least 15 houses. We are planning to name the children of the village as “green leaders of tomorrow” and entrust them with the responsibility of monitoring and ensuring the proper disposal of plastic waste at the facilities we built. The village currently has around 350 homes operating within the medium-level income group. Our students will be offering tuition-free classes to the students of the village in return for the clean and dry plastic waste they bring in. Later, we will install a waste management system in the village that can be maintained independently by the youth and local people.

The SDGs could be implemented effectively in India through systematic, localized and subnational initiatives.

During the High-level Meeting to commemorate the seventy-fifth anniversary of the United Nations in September 2020, Secretary-General António Guterres said, “No one wants a world government, but we must work together to improve world governance. In an interconnected world, we need a networked multilateralism, in which the United Nations family, international financial institutions, regional organizations, trading blocs and others work together more closely and more effectively.” These words can lead to change if and only if more young people join the journey. To that end, we have created a “Green Youth Parliament” to be convened soon. The Parliament will be a “Centre for Exchange of Knowledge” on the sustainable practices of managing plastic waste. It aims to interconnect various UNAI members in India to form an active learning platform for understanding environmental problems caused by plastic pollution and to generate solutions to persistent issues. These programmes will be made available in association with the Government, to adapt multilateralism for local implementation. Our target is to transform 30 villages, making them plastic-free in the next five years.

United Nations Security Council resolution 2535 on youth, peace and security underlines the role of youth and their contribution to society. It refers not only to youth responses and roles, but also to the importance of their involvement in the planning, design and decision-making processes. In keeping with this resolution, India should encourage its youth community to contribute their time and energy to helping villages follow sustainable plastics management. Although convincing younger generations and seeking their support for such worthy causes is relatively easy, working in the field to achieve results requires greater motivation and dedication, and higher levels of commitment. The country should entrust this task to academic institutions and request them to work in coordination with the national Government.

The SDGs could be implemented effectively in India through systematic, localized and subnational initiatives. Constituent states within the country, serving as the primary engines of progress, prosperity and development, have decisive roles to play in effective implementation. The Goals, having evolved from the fundamental principle of “leave no one behind”, should follow the same principle in developing initiatives at the grass-roots level. University campuses, which are the nexus of innovative thinking, can serve as centres of development and initiate systematic plans for effective implementation of the SDGs. Yes, campuses can help create a sustainable world and make it a harmonious place for all to live. Let’s be the doyens of change.

Asif Ayoob holds a degree in civil engineering and is pursuing a Master of Business Administration degree at Chitkara University in India. In 2020, the government of Kerala, India, conferred on him its “young social worker” award in recognition of his outstanding social service. 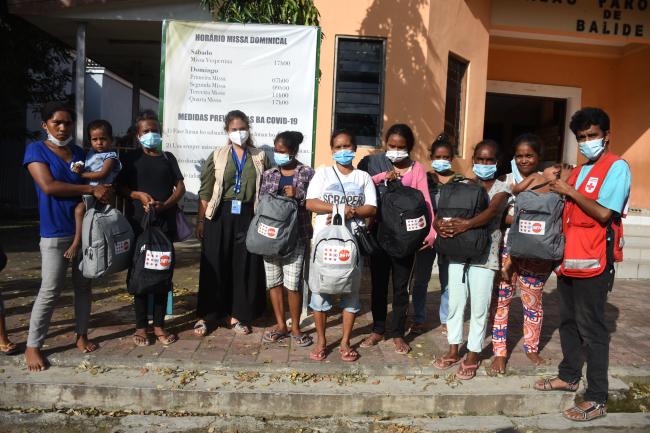 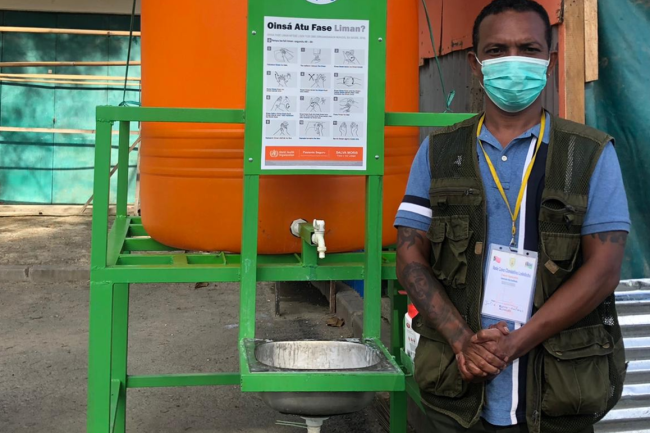 Julio is responsible for keeping the market operating during this emergency, because the market is a primary source of income for many households. 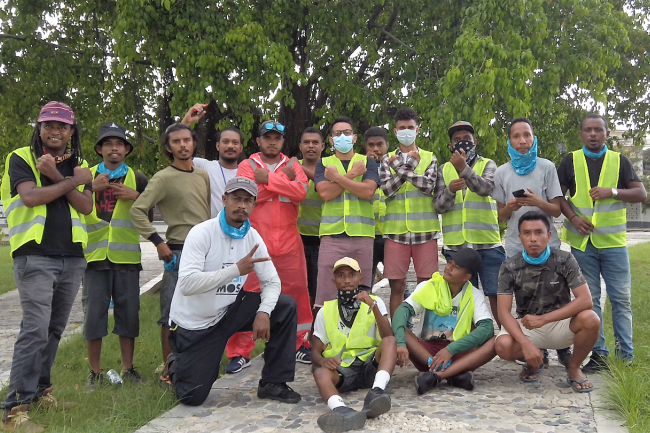 “We started with just 10 people and now we are 30. And more and more people from the community are helping us with materials, equipment, and donations”.